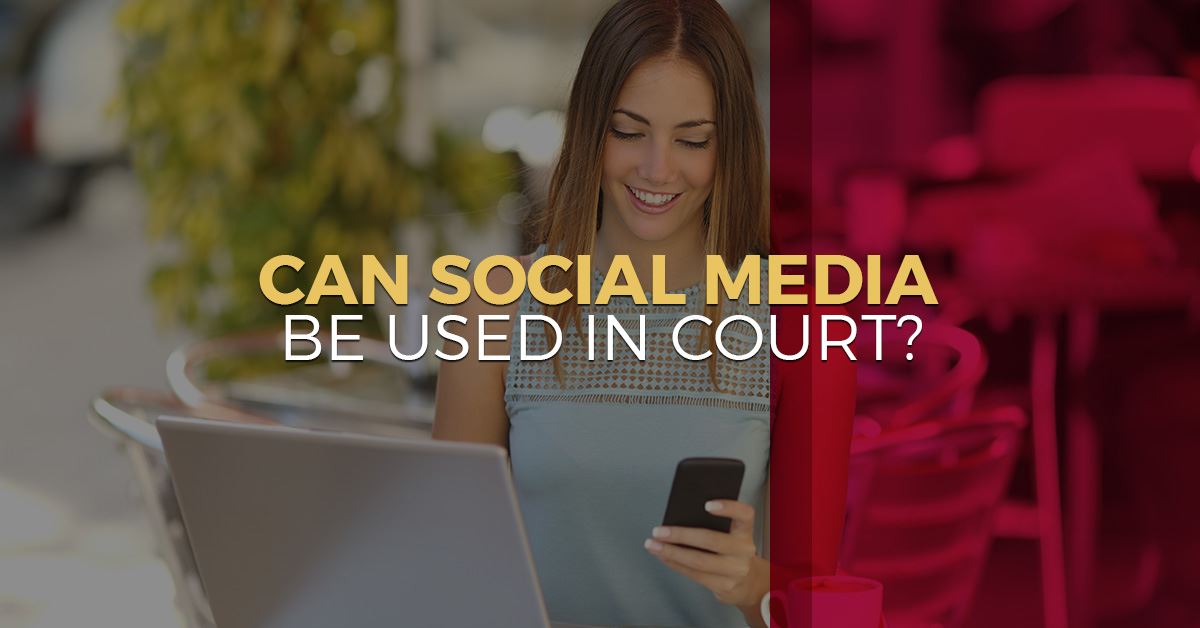 Social media is all around us. You probably log onto your social media at least a few times a day to check in to see what others are saying or to share a funny story about the events in your life. Social media is meant to be fun and a great way to let out some steam. It can become addictive to read what people have to say about your pictures, status, or the posts you share. Social media is beneficial for a few facets such as catching up with old friends, finding out about the latest events going on in your area, and reading about what’s going on in the world. Social media has a lot of positives; however, it also has a lot of negatives, especially when you’ve been charged with a crime. Social media is a place for us to detail our lives, share images of a fun Saturday night party, and even celebrate the cycle of life, which is why it can be used against someone in a court of law. The bottom line, when asked if social media can be used in court, is that it can, in fact, and has been used for many different trials. If you’ve been recently charged with drug charges, a DUI, traffic tickets, theft crimes, or have violated probation, then Roselle & Breitigam, P.C. can assist you in fighting your charges.

FIVE WAYS SOCIAL MEDIA CAN BE DETRIMENTAL TO A CASE

As social media becomes more and more popular it’s being used as a form of evidence in court. From cases such as Casey Anthony in 2011 to lesser-known ones that illustrate the character of an individual, Facebook, Twitter, Instagram, and other platforms of social media have been used as evidence. In the case of Casey Anthony in 2011, pictures circulated that showed her partying four days after her child was found dead. In the case of individuals who try to prove they are not harassing, making threats, or they were not at that party on a certain date, status updates, pictures, and check-ins on Facebook were used against them as evidence. If you’ve recently had charges against you and need a criminal lawyer, then social media can be just as detrimental to your own case. To help you avoid past mistakes by others who have had their social media used against them, here are five detrimental ways that social media can be used against you to in a court of law.

YOUR CREDIBILITY AND CHARACTER

Your social media represents you, which is why when the opposing team wants to bring up the question of your integrity and character it can be used against you. Let’s say that you’ve been charged with a DUI or drug charges and you want to claim it was a one-time situation. That’s fine unless there are images on Facebook that plainly say otherwise. The other side can use those images or your status that claims you were, ‘totally wasted Saturday night’ against you to question your character and your credibility. When it comes to your credibility, social media can allow the judge, jury, and the opposing side to see the ‘real you,’ instead of the one you want to represent in court. When pictures of you partying come up, then your credibility can be put into question.

Along with placing your credibility into question, social media can also help to create prejudice based on what you decide to post. For example, if you decide to post about how lucky you are to have only gotten fined or were able to out of going to jail and the judge or jury sees what you posted, their judgment of you can become clouded. In February 2016, two brothers were given a two-year jail suspension for being cannabis suppliers. When the judge saw on their social media that they were congratulating themselves for getting such a light sentence, she reconsidered her decision. Because she was disturbed by their tweets that were tawdry, she decided to give them a harsher sentence. Her perception of the situation was clouded based on her own prejudice of what was said on the Internet.

We touched upon this topic earlier. Pictures on social media are images that can be used against you in court. As we mentioned before with Casey Anthony, pictures were used to argue her character when it came to the death of her child. If you were Snapchating yourself or taking an Instagram picture while driving, then those pictures can be used against you for reckless driving, DUIs, and traffic tickets. If you decide to snap a picture while you’re stealing something or after the fact, then those images can be used to show that you participated in the charges you’ve been accused of. Pictures can say a thousand words and they can assist in giving you a harsher sentence because it’s considered to be evidence.

If you’re reading our blog and the first thought is, ‘I’ll just delete everything before the trial starts, no one will ever know,’ well that’s not the case. If you delete your social media, especially if there’s evidence on it, then you can be charged with penalties for tampering with evidence. If you haven’t gone to court or even hired a criminal lawyer, that doesn’t mean deleting your social media will go unnoticed. Lawyers can search for evidence on your social media platforms no matter if it’s the very beginning of the process or the end. If you decide to delete your Twitter, Facebook, Snapchat, or Instagram, then you can face even harsher penalties than you would if you just left them up. The best thing to do is to talk to your criminal lawyer to figure out how you can maneuver your social media, but whatever you don’t delete it.

NO ONE EXPECTS USING YOUR SOCIAL MEDIA AGAINST YOU

Located in Fort Collins, Roselle & Breitigam, P.C. is a firm of criminal lawyers who focus on areas that range from student criminal charges to domestic violence. As a Northern Colorado law firm, we strive to work meticulously to find a solution for your situation. We treat each case that comes to us uniquely and will never choose a one-size-fits-all approach to your situation. If you are fighting the charges for your specific situation, then take the time toreach out to us so we can help you get your life back.