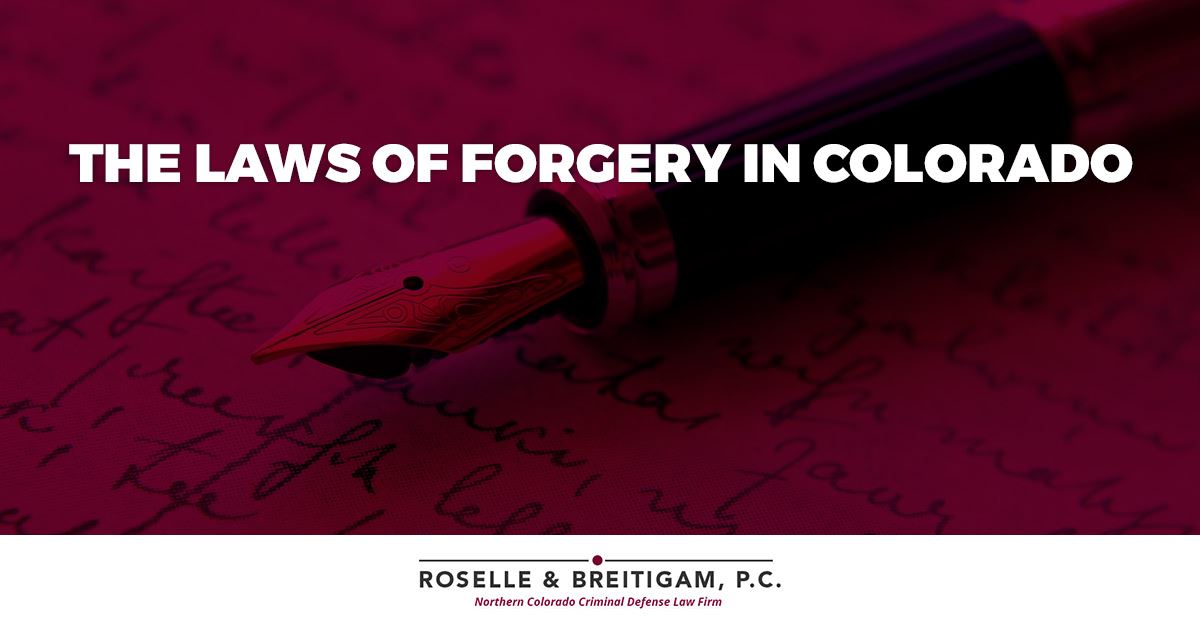 Being in a college town, it’s not unheard of that young college students are caught with fake IDs. With so many great restaurants and bars all over Northern Colorado, there’s bound to be a few young kids who get their fake IDs taken away. It’s almost a part of the college experience to have a fake ID, go out to the bar, and get kicked out by the bartender and bouncer for it being forged. When you have a fake ID, it might not seem like a big deal. After all, what’s the worst that can happen other than someone taking away it? However, having a fake ID is a form of forgery. Forgery is when a person creates or has documents that have been altered in a significant way. Forgery is a type of fraud and when you’re caught for forging documents you can get in a lot of trouble. In Colorado, the law prohibits creating and altering written documents, especially when you intend to deceive others with those documents. Additionally, it’s illegal to intend to trick others with the forged documents in your possession. Even if it’s just a fake ID, you can end up getting into severe trouble for forging documents.

If you’ve been accused of forgery, then take the time to hire a professional, reliable criminal lawyer from Roselle & Breitigam, P.C.

AN OVERVIEW OF FORGERY LAWS

Forgery is a pretty broad category, which is why we broke it down for you. We want you to have as much knowledge as possible, especially when you’ve been charged with a crime. Forgery overall can be a slew of creating documents that are false. From altering, creating, completing, and the intent to commit, forgery covers a spectrum of areas. In Colorado, there are many different types of forgery and the penalties can be severe. From fake IDs to creating counterfeit wills, we’ll be going over the forgery laws in Colorado.

There are many different types of documents that can be forged. Some of them have more severe punishments such as counterfeiting money. Counterfeiting money can get you over 10 years in prison depending on the scale you are operating on, but more about penalties later in the blog. Using and distributing forged money is illegal and, ultimately, you’ll be investigated by the Secret Service. Since 1865, the Secret Service has been investigating and preventing counterfeit money. Whether you get caught with the tools to counterfeit money or you are using it, you’ll be investigated and charged with forgery. Some the other types of forgery are listed below:

PENALTIES AT A GLANCE

When you’re caught for forgery, then you can face a slew of penalties. Depending on what the document is, you could face more severe punishment. First what you need to know is that forgery is a Class 5 felony. This means that you can be punished for one to three years in prison as well as a fine between $1,000 to $100,000. If you have more than one forged document, then it is a Class 2 misdemeanor, which is punished with jail time of three to 12 months and a fine of up to $1,000. Additionally, there are second-degree forgeries that are specifically for academic records that have been forged. This is a Class 1 misdemeanor with six to 18 months in jail and a fine of up to $5,000. Lastly, there is also a criminal possession of forgery tools that is a Class 6 felony. Keep in mind, if you’ve been charged with a felony, that doesn’t necessarily mean you’ll end up paying thousands of dollars in fines and spend time in jail. When you hire a professional criminal lawyer, he or she can go over your options when you initially meet.

HOW ROSELLE & BREITIGAM, P.C. CAN ASSIST YOU

Roselle & Breitigam, P.C. is a law firm that will fight to protect your right. From theft and property crimes to drug charges, we can go over your case and figure out the best strategy for you. If you want to ensure your future, then you need to hire a reputable lawyer to defend you. If you’re hesitant about appointing a lawyer to your case, remember that your conviction can carry heavy fines, jail time, and a permanent spot on your record for the remainder of your life. With experience, resources, and knowledge, Roselle & Breitigam, P.C. will figure out what you need to defeat your charges.