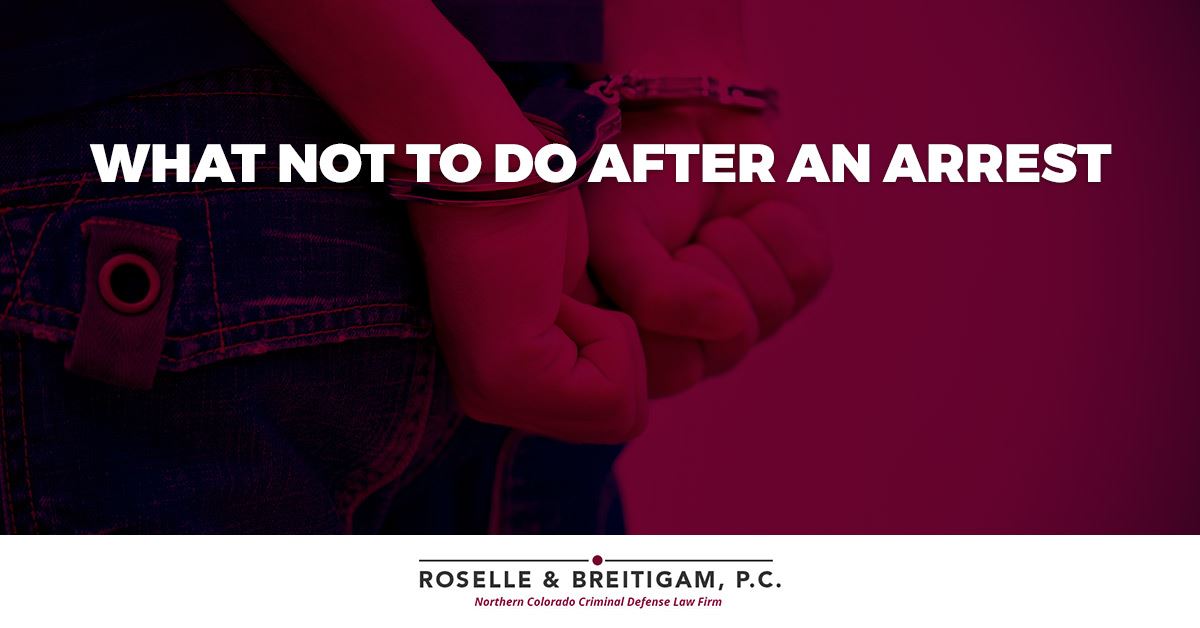 Whether you’ve recently been arrested or you want to know the actions you should take after an arrest for your own protection, we’re diving into the big picture of what you should avoid participating in once you’ve been charged by a police officer. In Steps You Should Take After Being Arrested, we outlined what you should do once you’ve been arrested, so today we’ll be playing devil’s advocate and letting you know what not to do following a brush with the law. Our defense attorneys at Roselle & Breitigam, P.C. want you to know what you should avoid doing so you have the best chances of having a positive outcome for your case. Getting arrested should be taken very seriously because the way you act during an arrest could be detrimental to your case. If you’ve found yourself arrested, before you do anything else, take the time to contact a defense attorney as soon as possible. We want to ensure you have the best chance of beating your charges and that means appointing an experienced and dependable lawyer to your case.

FOUR THINGS TO AVOID DOING AFTER AN ARREST

When you’ve been arrested, you should avoid doing these four things. If you do decide to do these four things, then you could do some serious damage to your case and harm any chances of getting lighter sentencing. For example, if you decide to resist arrest you could be facing a few more charges than you’d like. If you wait to hire a lawyer, then you won’t have the solid defense you need to have a positive outcome for your case. These tips will help you avoid a longer sentence or a higher fine than if you’d taken the proper precautions when you’ve been arrested.

Thinking straight while getting arrested isn’t something that usually happens. When you see the flashing blue and red lights in the rearview mirror or at your door, your first instinct might be to run. When we’re faced with serious situations, like getting arrested, your first instinct might be to run. Whether you’re in a car or on foot, you want to get away from the consequences of your actions. Running away won’t solve all of your problems. Also, it’s highly unlikely that you’ll escape several police officers swarming the area or having your description on TV or the radio to find you. In addition, running away may show that you’re guilty and the police officers might think that you’re carrying a weapon.

Furthermore, it’s vital that you don’t resist the arrest of any type. Resisting arrest means that you’re pushing the police officer away, swatting their hands, or pushing yourself away to keep the handcuffs off of your wrists. Any type of hitting of an officer can be seen as assault. Even swatting hands away, you could give the officer a slight injury and the few misdemeanor charges you were going to receive will turn into a felony.

This one is exceptionally imperative to remember because anything you say to a police officer can be used against you in a court of law. You might feel inclined to get chatty because you want to talk your way out of the situation, but when you’re quiet you won’t take the risk of revealing too much of what was going on prior to getting arrested. When a serious situation like this takes place, you might start babbling, and when the officer asks you a question you might say a little too much that gets you into even more trouble. Keep in mind that you’re in trouble and have been arrested, so the best way to handle the situation is to sit tight. You already made one mistake; do you want to continue down the path you’re on to incriminate yourself even more?

This is a very important one because you might feel inclined to make a deal because the officer said they could help you out if you just told them the truth. If you watch a lot of cop shows the moment where they try to reason with the suspect is when the truth usually comes out. As we mentioned previously, the best thing for you would be to stay quiet, especially because what you’re being told isn’t always to your benefit. If a police officer asks for further information on what’s going on and if you tell him or her because they say you’ll be released, don’t take it at face value. A police officer isn’t interested in helping you out, they are interested in finding out what happened to know who to charge with what. Even if the police officer says you can walk free, if you tell him or her what happened during the event, stay quiet and wait for a lawyer to show up.

WAIT TO HIRE A LAWYER

This is probably the most vital tip to remember when you’ve been arrested. Don’t ever wait to appoint a lawyer to your case. If you wait to employ a lawyer for your case, then you could spend a long time in jail, be questioned further by the police, and the outcome of your case could turn very sour. If you’ve been arrested, the first thing you need to do is hire a lawyer to protect your rights. A defense attorney will help your case to the best of their abilities and assist in building a solid one for the situation that made you have a brush with the law. Additionally, a lawyer will try to get you out of jail as soon as possible. If you wait to hire a lawyer, then you’ll find yourself sitting behind bars for a long time as you try to come up with a strategy to avoid police questioning without fully knowing your rights.

Roselle & Breitigam, P.C. is a law office located in Fort Collins, CO. We cater to the Northern Colorado region in ensuring that those who have come face-to-face with the law are able to strategize a plan for a positive outcome for their case. With these suggestions of what not to do after an arrest, we hope that you take our advice and reach out to a defense attorney as soon as possible when you’ve had a brush with the law. Our focus areas include DUI defense, drug charges, student criminal defense, felony and misdemeanor defense charges, theft and property crimes, domestic violence, probation revocation, and traffic tickets. For further information about what to do once you’ve been arrested and how we can help, contact us by filling out a free consultation form.